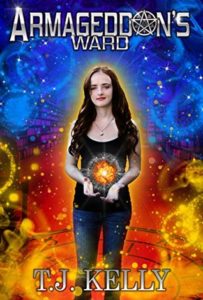 I really liked this story!  T.J. Kelly spins a wonderful yarn about a young woman who is blessed with a curse.

A young woman of seventeen, Mirabelia Rector finds herself cursed with the loss of her parents, and doubly cursed because she has yet to achieve her magic.  Now she must, in accordance to ritual, demonstrate a magic she can’t seem to bring about in order to inherit her deceased parents company.  If she can’t do it she will lose it all.

Lia comes face to face with the harsh reality that she must perform the ceremony of Ascension without the benefit of magic.  In Lia’s reality, awareness and use of one’s magic is a big deal, a really big deal.  So big a deal in fact, that not having it will prevent her from becoming the CEO of Rector Enterprises, one of the most formidable magic companies in the world.

From the point she tosses her parents off a cliff (Not a spoiler – you’ll see what I mean) to being forced by ritual to battle some of the most powerful magicians of her time; this plucky seventeen year old phenome tackles several challenges on her own terms.  Along the way, as Lia plows through obstacles in her usual strong willed, stubborn to a fault manner, she learns to love the support and protection of Armageddon, Peony, Mort, Peter and Chas.

At Armageddon’s castle Lia studies laboriously in order to learn her craft, but when she meets Chas, she realizes that there is something else on the castle grounds she is very interested in.  In quick fashion Lia subscribes to the oh- so-human and quite predictable plight of teenage pubescence, falling fast and hard in love for one of the Irregulars.  Then at the worst time this Irregular does something hoping to prove his love that almost kills her.  No really, it almost kills her.

TJ Kelly does a great job with the emotional aspects of two young teens and how they respond to critical situations and as I read it, I found myself knowing that Chas really loves Lia, but wondering if he really loves her enough.

This coming from a guy that doesn’t read romance novels!  Maybe I should right?

All in all, I found this a more than commendable work from an up and coming author.