C. Steven Manley spins a pretty darned good tale about the darkness of evil and the powers of magic and mysticism. The story opens with a tense scene where you meet Arlo, a slender, ring wearing magus with a serious case of attitude.

Before you have a 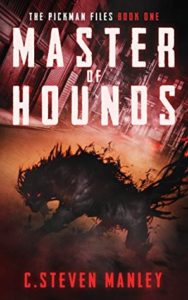 chance to settle in, C. Steven Manley clutches you by the throat and drags you into a world of death and destruction. I vaguely remember taking a breath or even moving to turn the pages until somewhere around page 51 when C. Steven Manley let’s go of the reader as if to say, “Got your attention now?”

Oh yeah, and then some. The scene in the parking garage with RN Clint Mercer and Arlo Dandridge sets the stage for Clint’s hesitant, and at times unwilling, involvement. Up against unbeatable odds, Clint tries to save his patient’s life only to discover that his newly acquired patient manages to save them both.

In that parking garage, turned into a killing field by the Mother’s Favored, Clint meets Jubal Mott for the first but certainly not the last time. Jubal is in town and he’s on a mission of destruction. If he succeeds he will lay waste to the entire population of the world. Just saying his name brings back thoughts of his brutality. Jubal Mott – so terribly southern and so delightfully evil.

And Jubal’s got help, a host of congregants, believers and followers of the Mother, hundreds of them, maybe even thousands, all willing to follow the Favored’s command without question.

Now the only thing between the Mother’s Favored and destruction is a Pickman who needs medication to maintain his less than rosy attitude, and Clint Mercer who now has something, a gift or a curse, he hasn’t quite decided yet. On a personal note, I loved the back and forth sniping between Arlo and Clint.

C. Steven Manley does a good job with plot development and sets the stage at the end for another run at the Mother and Favored. I would have rated this book a 5 star, but there are several technical difficulties I ran into along the way.

While some high toned book critic would probably trash the read based solely on the merit of those errors, I enjoyed the book because it was a good story and C. Steven Manley didn’t let me down at the end. Yes, there were some issues that were jarring, but dang, the story is certainly strong enough to carry the reader to the finish line.

I know it did me.