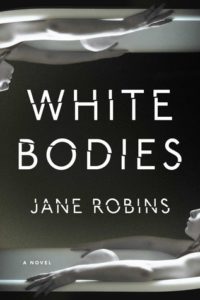 Ms. Robins’ writing is technically competent and the prose is tight and easy to understand. The book is well edited (great job to Ms. Robins and the folks at Touchstone) and a pretty fast read.  What’s troubling is that White Bodies is touted to be a psychological thriller. Unfortunately the “about the book” gets things half right. Ms. Robins does manage to portray the psychological aspects of her main characters Tilda and Callie relatively well; painting one as a narcissistic sociopath and the other as a neurotic although functional obsessive compulsive who lives her life vicariously through her sister.
However, proclaiming this story to be a thriller is an affront to all the true psychological thrillers out there on the market today.

Callie’s narration of the entire event, including flash backs that seemed nothing more than attempts to help the reader comprehend why the adult twins were like they were, read like an autobiographical “day in the life”. In the first few chapters, keeping with the thought that I was reading a thriller, I told myself that maybe Ms. Robins wanted the reader to get into Callie’s head.

Now we were talking!

I can really get into a story where the author lets the reader get into the head of a psycho. Thoughts of Norman Bates ran through my mind and I patiently read.  For almost one hundred and ninety four pages I patiently waited for the story to gain a pulse, staunchly believing that the flat lined plot would begin to throb and come alive.

And I read, and I read and I read. I continued to read as Callie tried and failed at relationships, as she sat in the bookstore where she worked and worried that Felix was going to harm her sister. I read as she perused the internet night after night seeking validation in her belief that Felix was abusing her sister.

Don’t get me wrong. The underlying theme of abused and battered women was not lost on me. As a southern gentleman, I know women are the most precious human beings on the planet. I also know they suffer unspeakable cruelties at the hands of men and have for ages.  Because of this knowledge, I was immensely disappointed that Ms. Robins didn’t do a better job of showing the very real struggle of women within the story. Instead she chose to let Callie narrate the issues which in turn forces the reader to hear about the problem instead of experience it.

We needed to be empathetic, needed to be caught up in the struggle, but all we were given was Callie’s perspective. As readers we never had the chance to experience the pain.

What was even more dismaying was the scene when Callie realized what Scarlett really wanted to do. Callie was shocked and mortified. As a reader I should have been shocked and mortified along with her but the reality of it was that Ms. Robins dangled far too many clues about the scheme almost twenty pages before.  Where there should have been a climactic discovery, a pivotal turn in the story, Ms. Robins provided her readers nothing more than tone deaf validation of what they already knew.

I was rewarded by one scene, unfortunately only one, single scene that quickened my heart seeming to promise a roller coaster ride to the finish. Ms. Robins did a good job with the action of Tilda, Felix and Callie when Felix demonstrated his anger up close and personal to Callie. Of course the knife Callie wielded may have had something to do with his anger. But the entire scene was infused with emotion. You could feel it emanating from the pages, wrapping around you as it tried to consume you.

And then it was gone.

The reader was left with monotone narrative all the way to the end which fell apart as the reader tries to understand what Callie’s real purpose in the story was.  Was she manipulated to perform unspeakable acts? Was she part of a malevolent conspiracy? Or was she the same functional obsessive compulsive twin sister who in the end has a secret she can never tell?

As I read the last page of White Bodies I felt terribly unrequited by a no frills, and definitely no thrills story that didn’t live up to its hype.